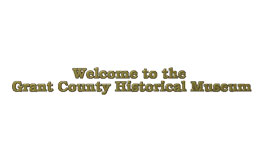 The museum collection began when Charley Brown was approached by someone wanting Charley to buy his saddle because he was short of money. Charley paid the man for the saddle and he said that within weeks, everyone in town was cleaning our their attics and bringing him their “old relics”. His little gas station on Washington St. soon looked like an overflowing antiques store! He was paying more money for “relics” than he was taking in for gasoline. Later he sold the collection to the Grant County Historical Society. But with no building, the collection was packed into the basement of the county courthouse. In 1953, well-known rancher, Herman Oliver offered to pay for a building to house the “old relics” and the museum was born! Since then, Grant County citizens have been very generous in donating their “old relics” to fill out the collection!